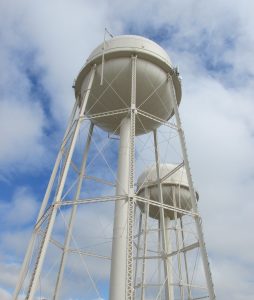 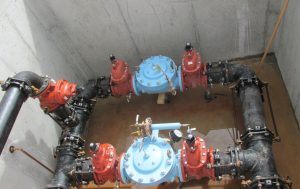 Reliable water levels are a necessity when it comes to water towers – especially when water towers are relied upon for fire protection.

Five water towers are situated on the Tinker Air Force base complex just outside of Oklahoma City. Tinker is the headquarters of the Air Force Materiel Command’s (AFMC) Oklahoma City Air Logistics Center (OC-ALC), which is the worldwide manager for a wide range of aircraft, engines, missiles, software and avionics and accessories components.

When the Tinker Air Force Base water towers, which are mainly used for fire pumps and water supply, began having problems keeping up their water levels, Tinker officials knew they needed to take preventive action.

Under normal operating conditions, valves within the water towers are expected to turn on and open if the water pressure in the tower falls below 52 psi. For normal operations, it is important for the water levels to be maintained at the same pressure throughout the base. When Tinker’s water towers began having issues maintaining consistent water levels, air force base officials decided to replace the altitude valves on the five towers.

Armed with specs from the U.S. Army Corps of Engineers, a team of base engineers conducted a search to find a valve manufacturer that fit the project requirements. OCV Control Valves, a company with over 60 years of experience in the design, manufacturing and application of control valves, was selected for the project.

OCV was commissioned to replace both the altitude control and check valves on all five water towers on the base. The project involved replacing not only valves but also the valve vaults. Each vault had to be dug out of the ground and replaced with new piping and valves.

OCV determined that a delayed drawdown altitude valve was needed to empty the water towers before they would be refilled by OCV valves. The OCV team reviewed drawings and worked through the application with the base engineers and concluded that it would be more effective to not completely drain the tanks as they would not have any pressure to fight fires if the tank level was low.

One of the first steps of the project involved the manufacturing of the valves. “Lead times for these types of valves can be upwards of six months,” said Mike Walker, project manager at Trade Mechanical, a year-round subcontractor to Tinker Air Force Base. “However, OCV was able to deliver the products well ahead of that time frame, allowing the project to stay on schedule.”

According to Walker, OCV answered project questions and assisted with issues in a timely manner. When one of the valves didn’t immediately set or regulate, OCV engineers stayed on site until the problem was solved. OCV was able to verify the valves were set according to the specs that were submitted. The contractor was able to set the valve correctly thanks to OCV’s aid to thoroughly and successfully complete the job.

Richard Marsh, President of Trade Mechanical Contractors, also added, “OCV was instrumental in providing on-site technical and engineering support for the start-up of the valves. Any issues that came up during start-up period were addressed and resolved immediately.”

Towards the end of the project, OCV Control Valves was also on hand for the commissioning. Once each of the valves were deemed to be working properly and the pressure was correctly set, commissioning occurred. The U.S. Army Corps of Engineers, base engineers and base contractors were all involved in the commissioning. There were some minor adjustments that occurred that OCV was able to assist with.

“OCV Control Valves delivered the products on time, made them perform as proposed and helped answer our questions,” said Walker. “There was good teamwork all around.”